Middle School students are hard at work preparing for opening night of this year’s musical, “Rudolph the Red-Nosed Reindeer, Jr.” The show may not premiere until December 2nd, but plans have been forming since the summer, when the show was chosen, and a team was assembled. 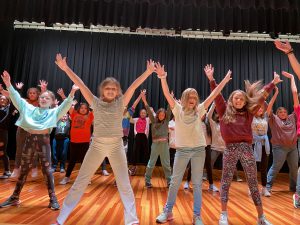 This year, music teacher Mary Buchmann is the director, producer, and choreographer, music teacher Rebecca Harrison is the music director, Bethany Rose is the set director, and Laurie Elliott is the costumer. Many parents are also helping to build the set, paint, make costumes and props, and hang posters.

There are 43 cast members from grades 5-8 and two high school helpers, Alyssia Flynn and David Bracy. Students agree that participating takes a lot of time and dedication, but that it’s worth it.

“Being in the show is fun, and helps you gain confidence,” said Kennedy Harmon, who’s playing an elf in the musical.

“I’ve learned that being in a musical requires a lot of teamwork, and during the whole process of the musical, the cast bonds and creates stronger friendships,” added Jeremiah Lasher, who’s playing Sam the Snowman. 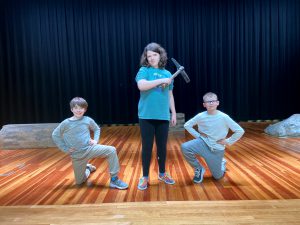 During rehearsals, Buchmann and Harrison split their time with the students; Buchmann works on staging and choreography, while Harrison works on the music. Rehearsals happen Monday through Thursday, and get longer as the show gets closer. For the most part, students are only called to rehearsals when they are needed for staging or music.

“During rehearsals, I try to run the scenes as many times as possible because we have what we call “No book November,” explained Buchmann. “All students need to have their lines learned by November 1st! This assures that the performances will run smoothly.”

It has become a fun tradition to have former middle school performers help once they are in high school. This year’s helpers, Alyssia Flynn and David Bracy, were both in last year’s production of Annie Junior. This year, they help get the stereo out and set things up before rehearsal, and assist the students whenever needed during the rehearsal. 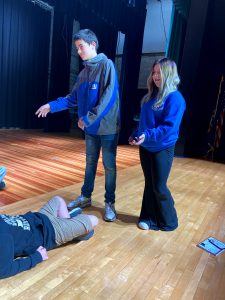 “What I absolutely love about directing the musical is watching shy students blossom on the stage, working with our talented students to create magical scenes, and watching my ideas come to life,” said Buchmann.

Students who are part of the musical not only work hard to create and memorize the show, but learn to be quiet backstage, how to move set pieces, and they create wonderful friendships.

“I just love being in the musical and surrounded by such kind people; they make being up on that stage a whole lot less scary,” explained Leah Barnhart, who is cast as a reindeer.

If you’d like to see the culmination of everyone’s hard work, you can watch this year’s musical on Friday, December 2nd or Saturday, December 3rd at 7 p.m. in the Jr.-Sr. High School Auditorium.