“It is an honor to receive this award as it recognizes my career as a music teacher in the Weedsport Central School District,” said Woodworth.

During her time with Weedsport, Woodworth directed the pit band and 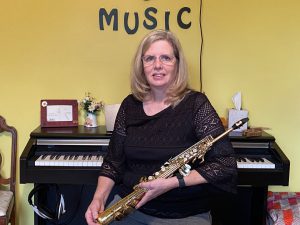 held many other music-related roles for multiple Weedsport High School musicals. She even helped with musicals at other area-schools. Laura has also been organist at the Weedsport graduation, served as marching band director, and Middle and High School Jazz Ensemble Director. Overall, Woodworth said sharing her love of music with all of her students brought her joy every day.

“Concerts were the highlight of all the hard work we put into rehearsing. Working with students and standing in front of each group was a joy for me,” explained Woodworth.

She performed a soprano saxophone solo at the concert. Woodworth’s accompanist is Melissa Zimmer Savitz, who is a Weedsport alumna from the Class of 1979, and was inducted into the Weedsport Performing Arts Hall of Fame in 2002.